FDA Approves Fiasp For Treatment Of Children With Diabetes.

On January 6, Novo Nordisk announced that the FDA approved Fiasp®

100 u/mL for children with diabetes.

Fiasp, man-made insulin that is used to control high blood sugar in adults and in children with diabetes.

Fiasp, had already been approved for use in adults in 2017 and It is the first and only fast acting insulin faster aspart injection which does not have a pre-meal dosing recommendation and is administered at the beginning of the meal or with 20 minutes after the starting of a meal.

The FDA approval of Fiasp for pediatric use was heavily based on the data taken from Onset 7, a 26 week, double blind, phase 3b trial which investigated Fiasp's efficacy as well as safety compared with conventional insulin aspart injections in almost 1000 children with diabetes.

There was no statistical difference in the overall rate of hypoglycemia between the two groups. 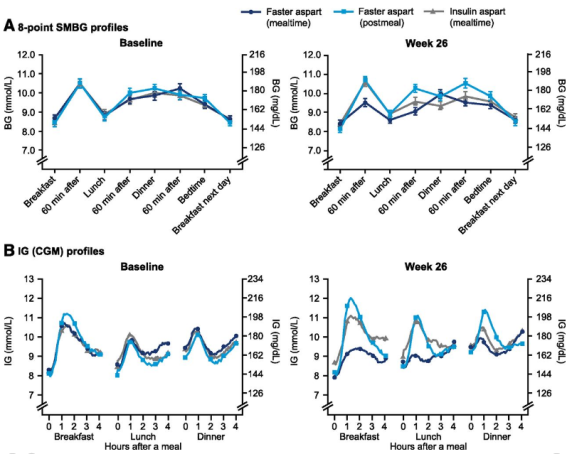 Glucose profiles at baseline and 26 weeks after randomization with 8 point SMBG (self-monitoring blood glucose) and CGM (B)
No statistically significant difference in SMBG was observed between the 2 groups.

As shown in this graph, noninferiority of mealtime and postmeal faster aspart versus mealtime converntional insulin confirmed.

Todd Hobbs, vice president and U.S chief medical officer of Novo Nordisk is a parent of a son living with diabetes: "I know first hand how tough is can be to address the inevitable blood sugar spikes around mealtimes" is what he said in an interview for the American Journal of Managed  Care.

Children can be upredictable and having the option of a fast-acting insulin that does not require pre-meal dosing like fiasp is a welcome development for the diabetes community."

According to Hobbs, Fiasp gives parents and providers safety and peace of mind when it comes to children's insluin dosing and eating.

"Even of they have to wait a few minutes afterwards to see if their child is eating and hungry, they can do that without having to worry about the pre-meal dosing time and all the things go into that" - he said.

Fisap can be administered in three different way:

​It can be administered at the beginning of a meal or (up to) 20 minutes after the meal is finished.

There are no entries yet.