Teplizumab - A Milestone In Diabetes Treatment

Despite recent advances in research, the number of new therapies for type 1 diabetes remains limited.

The recent approval of a new drug called Teplizumab by the Food and Drug Administration (FDA) reached a milestone in diabetes research.

This new drug is the first step to getting where we eventually want to go, which is eliminating type 1 diabetes.

The drug was developed by Provention Bio, a small pharmaceutical company out of New Jersey, and will be marketed under the brand name Tzield.

Tzield is joining two other proven therapies for type 1 diabetes, Symlin, and Insulin.

It is also the first disease-modifying drug for type 1 diabetes. (1)

Stage 2 type 1 diabetes is an autoimmune condition defined when two or more diabetes-related autoantibodies are present in the blood.

Such a finding may suggest beta-cell autoimmunity.

There is no evidence of clinical manifestations or symptoms at this stage.

Tzield can delay progression from stage 2 to stage 3 type or clinical type 1 diabetes.

The FDA’s approval was based on the TN-10 trial (2), which was a 9-year trial that included 77 participants who had stage 2 diabetes and also had a close family member with stage 1 diabetes.

The outcome of this trial showed promising results with a median two-year progression delay from stage 2 to stage 3 diabetes. 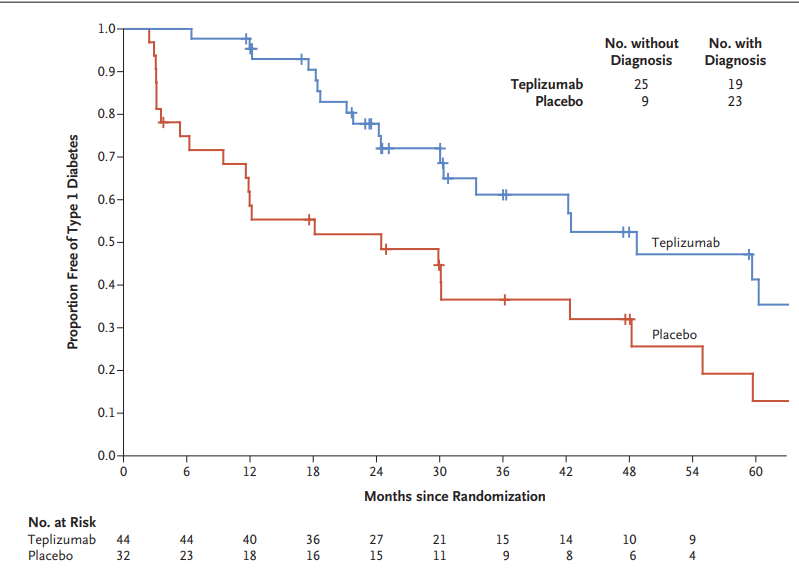 The effects of Teplizumba on type 1 diabetes, TN-10 trial (2)

Based on the clinical trial’s screening criteria, Sanofi estimated the target population to be 30 000; however, according to a 2020 CDC report (3), it is estimated that up to 1.4 million people in the USA are undiagnosed with stage 2 type 1, which can potentially expand the market for the drug.

Jason Hoitt, ProventionBio’s chief commercial officer, said the treatment would carry a unit price of US$13 880 per vial or $192 900 for a two-week vial regimen for the average patient.

Due to this high cost, commercial success heavily depends on insurance coverage.

Many leading experts have linked arms to develop Tzield. Still, only three researchers were present from the beginning: Professor Lucienne Chatenoud, Professor Kevan Herold of Yale University, and Jeffrey Bluestone, the CEO of Sonoma BioTherapeuics.

The effects of Teplizumba on type 1 diabetes, TN-10 trial (2)

When Bleuston’s research of immune tolerance in organ transplantation and the role of CD3 in the process stalled, he joined Herold’s research on whether Teplizumba could inhibit T-cell attacks on pancreatic beta cells.

The promising results of their research were then reinforced by Chatenoud’s study that suggested that the drug can reverse diabetes in newly diagnosed mice.

In following clinical trials, Herold reported in 2022 that 9 of 12 people showed improved insulin production after one year of treatments with monoclonal-antibody against CD3+.

With the results gaining clinical cachet, the drug was purchased by a small biopharmaceutical out of Rockville, Maryland.

In 2008, MacroGenics licensed the drug to Eli Lilly, which had more extensive resources to conduct larger clinical trials on the drug’s efficacy and safety.

However, followed by a series of failed trials to meet the company’s efficacy endpoint, it decided to end its involvement.

The research continued, and in 2012, JDRF and the NIH funded another large-scale clinical trial conducted by the Immune Tolerance Network while Herold was running another clinical trial that identified who was more likely to respond to the drug.

In 2018 Provention Bio acquired Teplizumb from MacroGenics and announced its sponsorship of another critical trial, which was led by Herold this time.

Despite the results being first presented in 2019, the FDA required more crucial data before issuing its final approval in November 2022.

While a 2-year delay may seem like a modest advancement, we must remember that it represents a median delay, and some participants exhibited longer delays, even up to 10 years.

According to Herold, Teplizumab can be a catalyst for future drugs and interventions treating and possibly curing or preventing type 1 diabetes and other autoimmune diseases.

There are no entries yet.